Biden promised to renegotiate NAFTA, but failed to even try as VP.

Last week, Joe Biden falsely told CNN's Jake Tapper that he had been "against NAFTA" after he voted for it, a bizarre claim that is easily refuted simply by listening to Biden's own words defending NAFTA. As late as 2007, Biden was defending his vote for NAFTA, saying it did not "aggrieve" him and that NAFTA "wasn't the problem." Even last year, Biden was still saying he was "proud" of his record on trade.

The Washington Post Fact Checker took a look at Biden's attempt last week to rewrite his record on NAFTA and awarded him two Pinocchios for his efforts.Biden refused to take responsibility and blamed President George H.W. Bush. "There is no evidence that is the case," says the fact checker, adding that "Biden jumbled the history[.]"

Biden has also refused to take responsibility for failing to keep his promise to renegotiate NAFTA when he was Vice President. "[Trump] renegotiated NAFTA and you didn't," Tapper told Biden after he offered a series of excuses as to why he didn't keep his promise.

Biden likes to say he won't lie to the American people, and that he will always accept responsibility for his actions. That's malarkey. Biden routinely makes up pathetic excuses and blames others.

Voters in Michigan, Wisconsin, Ohio, Minnesota, and Pennsylvania can see right through Biden weakness and failure. They know President Trump is their champion. He made a promise to renegotiate NAFTA, and unlike Joe Biden, he actually did it. 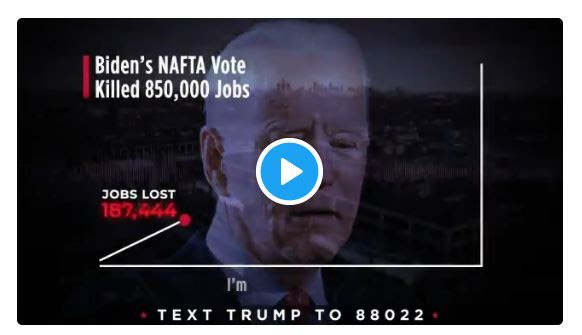