The Biden campaign will now start door-knocking, a practice Democrats repeatedly said was dangerous and ineffective

Today, The Biden Campaign Announced That They Would Begin Door Knocking, In "A Reversal" After "The Biden Campaign Had Previously Kept Its Focus On Organizing Digitally And By Phone." "Joe Biden's presidential campaign will begin door-knocking this week, a reversal after some Democratic groups in battleground states expressed concerns that its caution about social distancing was closing off a vital tool for reaching voters. Hundreds of volunteers will start hitting the streets this week in Nevada, Michigan, Minnesota, New Hampshire and Pennsylvania, according to a Biden campaign official, with an expansion planned for next week. Unlike President Trump's campaign, the Biden campaign had previously kept its focus on organizing digitally and by phone, saying it didn't want to risk the health of supporters, volunteers and staffers amid the coronavirus pandemic. But campaign staff say they have been working on a strategy to engage voters in person since the Democratic convention in August. 'We're now expanding on our strategy in a targeted way that puts the safety of communities first and foremost and helps us mobilize voters who are harder to reach by phone now that we're in the final stretch and now that Americans are fully dialed-in and ready to make their voices heard,' Biden campaign manager Jen O'Malley Dillon said in a statement." (Eliza Collins, "Biden Campaign Launches Door-Knocking Campaign," The Wall Street Journal, 10/1/20) 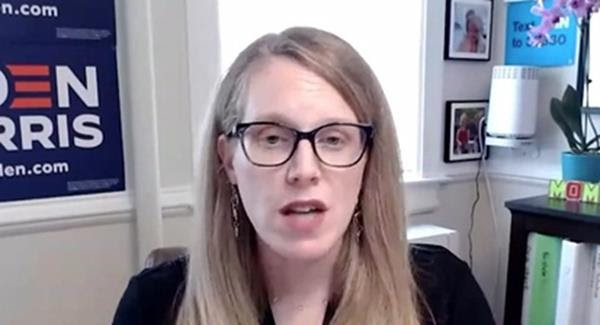 Biden National Press Secretary TJ Ducklo Said "That's What Leadership Looks Like" When Asked About Only Virtual Canvassing, Saying The Biden Campaign Was "Prioritizing" The "Health" And "Safety" Of Voters. "But Biden officials insist the growing disparity in physical door knocks is a mirage because of other methods they're using to get in contact with voters. Biden's campaign said its employees and volunteers are having thousands of 'meaningful conversations' a day with voters in battleground states about him, 'while prioritizing public health and the safety of our supporters,' guided by the conditions on the ground. 'That's what leadership looks like,' spokesperson TJ Ducklo said, 'and is what voters want to see in their president.' The strategy to hang back also reflects Biden's lower tolerance for risk and the degree to which he's emphasizing the dangers of the virus. (Christopher Cadelago, "Voters To Trump And Biden Camps: Don't Come Knocking On Our Doors," Politico, 9/22/20) 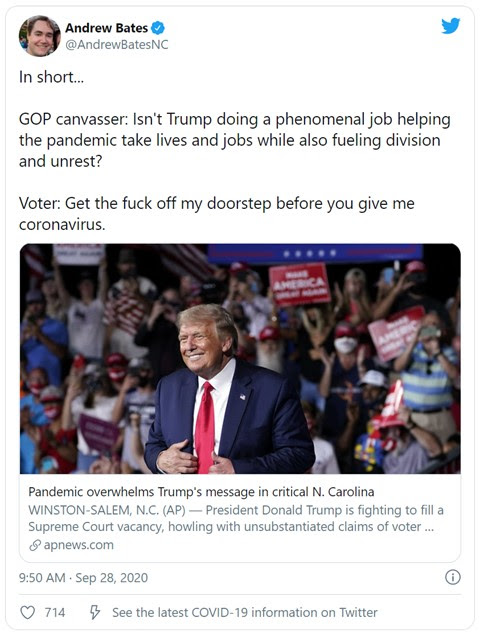 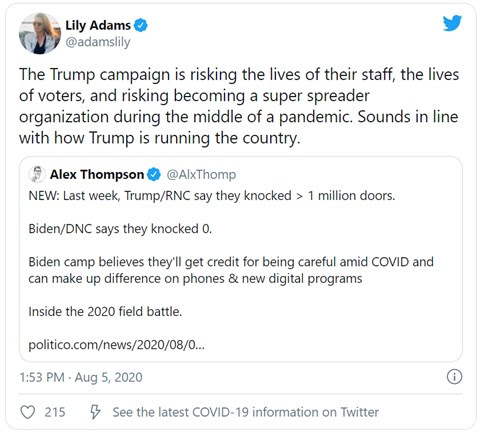 DNC Chief Technology Officer Nellwyn Thomas Touted The DNC And Biden Campaign's Use Of Phone Calls And Texts, Saying Door-To-Door Canvassing "Doesn't Scale Well, Specially In An Era Of COVID." "Although the national database had been in use before, a new element is Sonar's ability to predict which phone numbers are accurate and how voters prefer to be contacted, said Nellwyn Thomas, the DNC chief technology officer. 'This will absolutely be used by the Biden campaign in the presidential race but also in the House and Senate races,' she said. Former Vice President Joe Biden is the expected Democratic nominee. Political campaigns are 'effectively giant communication engines and they're communicating at many different levels' with voters, Thomas said. Campaigns use a combination of approaches to drive their messages, such as large gatherings, news events, announcing policy proposals and direct one-on-one contacts. But door-to-door canvassing 'doesn't scale as well, especially in an era of COVID, so using phone calls and text messages becomes increasingly important,' she said." (Gopal Ratnam, "Please Answer The Phone (Or Text), This Is The Democratic Party Calling," Roll Call, 7/15/20)

Other Democrats And Liberal Organizers Joined In, Saying There Was "No Ethical Way" To Door Knock

House Speaker Nancy Pelosi (D-CA) Called Democrats Decision To Not Hold In-Person Door-Knocking "A Matter Of Life And Death." HOUSE SPEAKER NANCY PELOSI (D-CA): "Well, let me just say that everything – people have to make their judgment in their region. If the incidence of infection is low they may have more capability of reaching out to people. But the fact is this is a matter of life and death. And the ability to – we all would much – we all draw strength from our contact with our constituents. They're our inspiration. They show us the ramifications of public policy and the rest. They give us initiatives of national significance to share with others. So, we all miss that. There's no question. But the fact is, we have to protect them. We have to protect them. And so I would say – again, I don't know what the Republicans are doing. I have no advice for them, except when they come here they have to wear a mask. But the fact is listen to the scientists. The scientists give you the best guidance on how to interact with others, and social distancing is a very important part of it." (Nancy Pelosi, Remarks During Weekly Press Conference, Washington, D.C., 8/27/20) 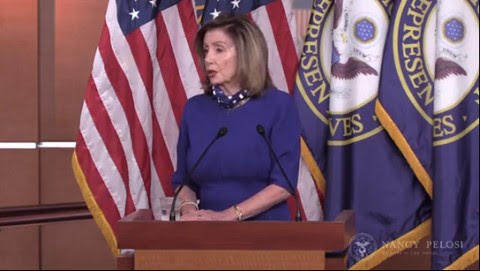 Democratic Organizer Greta Carnes Said There Is "No Ethical Way" To Canvass During A Pandemic And That Canvassing Puts Volunteers And Voters "At Risk." "'The biggest reason why we're choosing not to canvass is because there is not an ethical way to canvass during a pandemic, there's just not,' Carnes said. 'It's one thing to know that you're putting your volunteers at risk, but it's totally another to have them go to doors and you have no idea what the situation of people at those doors is,' she added. 'You have no idea if they have a kid who's got cancer. You've got no idea if they're immunocompromised. There just, point blank, is no ethical way to approach canvassing at scale in a year like this.'" (Will Steakin, Justin Gomez, And Terrance Smith, "Trump's Defiant Campaign Amid Pandemic Ramps Up Ground Game, As Biden Looks For Another Way," ABC News, 8/1/20)

Former Buttigieg Presidential Campaign Senior Advisor Michael Halle Said The Biden Campaign Was "Acting Responsibly In A Pandemic" By Not Door Knocking. "'Politics is the last remaining marketing entity — which essentially is what a campaign is — that utilizes door knocking as a technique,' said Michael Halle, a former senior adviser to Pete Buttigieg's presidential campaign. 'The Trump approach of measuring door knocks is very antiquated and I think the Biden campaign may be following that model if they hadn't been forced to think differently because they're acting responsibly in a pandemic.'" (Alex Thompson, "Trump's Campaign Knocks On A Million Doors A Week. Biden's Knocks On Zero," Politico, 8/4/20)

Former Kamala Harris Spokesperson Ian Sams Said The Trump Campaign Was "Embracing Extreme Minority Views During The Pandemic" By Door Knocking. "There's been a lot of media coverage and Dem bedwetting about the Biden campaign's decision not to door-knock due to covid. But guess what? Only 16% of Americans—and 7% of independents—even want that. Yet another way Trump is embracing extreme minority views during the pandemic." (Ian Sams, Twitter, 9/24/20) 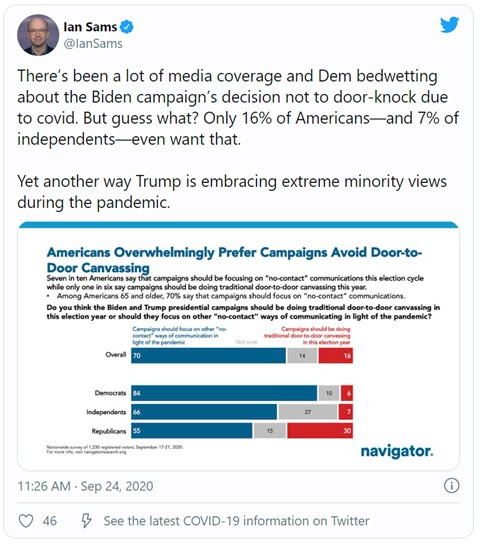