Biden openly admits he wants to "end fossil fuel" and sacrifice hundreds of thousands of oil and gas jobs, betraying workers and leaving America at the mercy of foreign energy producers

In July 2019, Biden Said That There Would Be No Place For Fossil Fuels And Fracking In A Biden Administration, Saying "We Would Make Sure It's Eliminated." DANA BASH: "Just to clarify, would there be any place for fossil fuels, including coal and fracking, in a Biden administration?" JOE BIDEN: "No, we would -- we would work it out. We would make sure it's eliminated and no more subsidies for either one of those, either -- any fossil fuel." (Joe Biden, Remarks At A Democratic Presidential Primary Debate, Detroit, MI, 7/31/19) 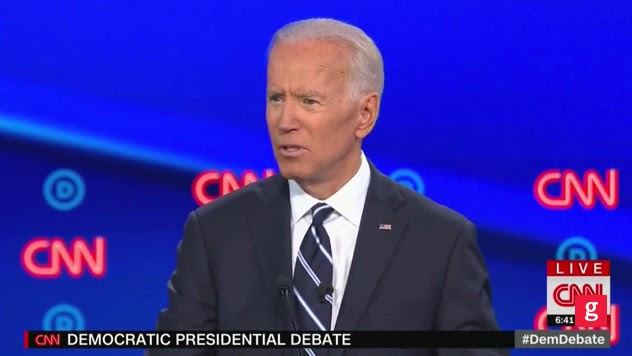 In March, Biden Reiterated He Would Block Any "New" Fracking, Any Coal Plant Construction, And All Oil And Gas "Drilling On Federal Lands." BERNIE SANDERS: "Joe believes, to continue fracking. Correct me if I am wrong. What we need to do right now is bring the world together, tell the fossil fuel industry that we are going to move aggressively to win solar, sustainable energies..." JAKE TAPPER: "Thank you." SANDERS: "... and energy efficiency." TAPPER: "Thank you, Senator." JOE BIDEN: "No more, no new fracking. And by the way, on the Recovery Act, I was able to make sure we invested $90 billion in making sure we brought down the price of solar and wind, that is lower than the price of coal. That's why not another new coal plant will be built. I did that while you were watching, number one. Number two, we're in a situation where we in fact have the ability to lay down the tracks where no one can change the dynamic. And that's why we should be talking about things like I've been talking about for years, high speed rail, taking millions of automobiles off the road. Making sure that we move in a direction where no more, no more drilling on federal lands, making sure that we invest in changing the entire fleet of the United States military." (Joe Biden, Remarks During Presidential Debate, Washington, DC, 3/15/20) 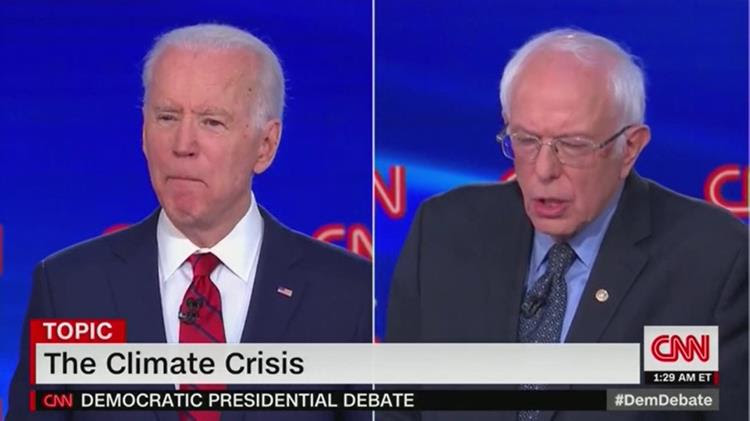 In September 2019, Biden Vowed To "End Fossil Fuel." JOE BIDEN: "But kiddo, I want you to just take a look, ok. You don't have to agree, but I want you to look in my eyes, I guarantee you, I guarantee you we are going to end fossil fuel and I am not going to cooperate with them, ok." (Joe Biden, Remarks At A Campaign Event, New Castle, NH, 9/6/19) 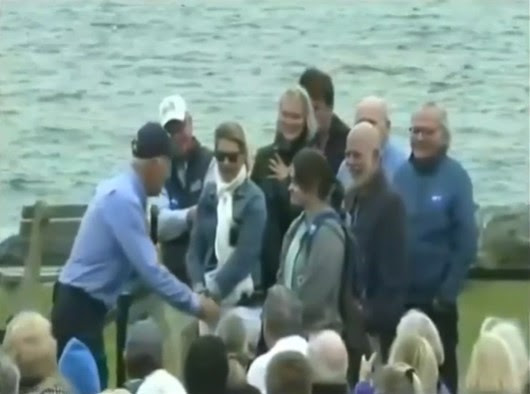 In December 2019, Biden Said He Would "Love To" Ban Fracking Nationwide And "Love To Make Sure We Can't Use Any Oil Or Gas, Period." JOE BIDEN: "Look, you're going to ban fracking all across America right now, right?" VOTER: "I would love to." BIDEN: "Yeah. I'd love to too. I'd love to make sure we cant' use any oil or gas, period." (Sunrise Movement, YouTube, 12/6/19) 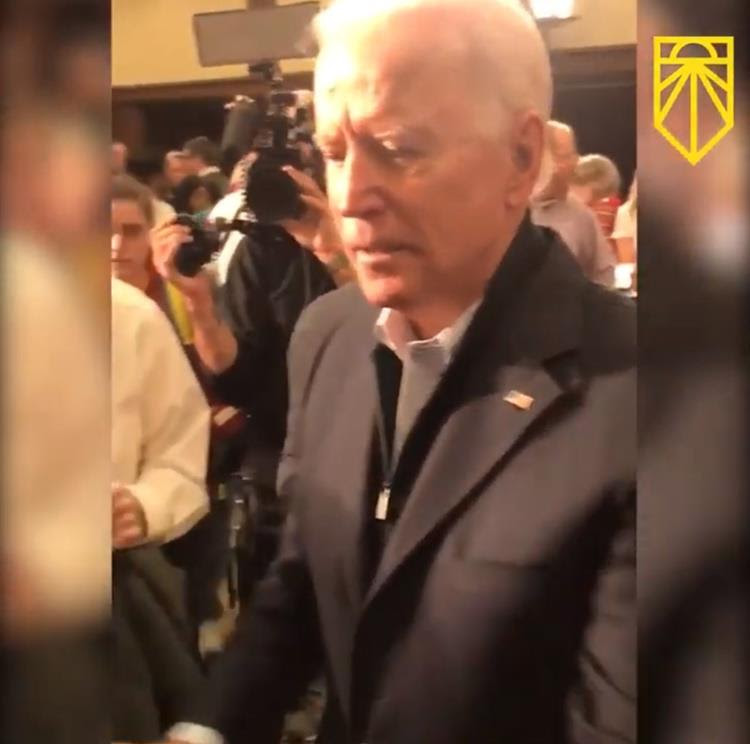 In December, When Asked If He Was "Willing To Sacrifice" "Hundreds Of Thousands Of Blue Collar Jobs" As Part Of His Energy Policies, Biden Did Not Hesitate In Saying "Yes." TIM ALBERTA: "Vice President Biden, I'd like to ask you. Three consecutive American presidents have enjoyed stints of explosive economic growth due to a boom in oil and natural gas production. As president, would you be willing to sacrifice some of that growth, even knowing potentially that it could displace thousands, maybe hundreds of thousands of blue-collar workers in the interest of transitioning to that greener economy?" JOE BIDEN: "The answer is yes." (Joe Biden, Remarks During Democratic Debate, Los Angeles, CA, 12/19/19) 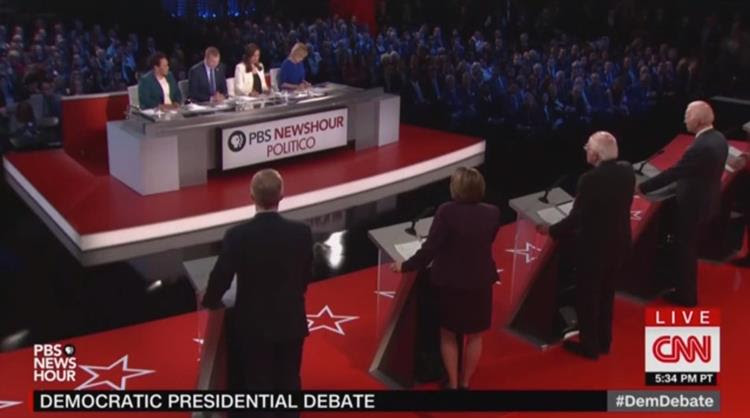 Oil And Gas Is A Critical Part Of The U.S. Economy – Supporting More Than 10 Million Jobs And Contributing $1.3 Trillion

In 2015, The Oil And Gas Industry Contributed $1.3 Trillion To America's Gross Domestic Product – 7.6 Percent Of The Total. ("Natural Gas And Oil: A Critical Contributor To American Prosperity," American Petroleum Institute, 7/17)

Biden's Plan To Block New Oil And Gas Development On Federal Lands Would Kill 268,000 Jobs And Cut Billions In Royalties 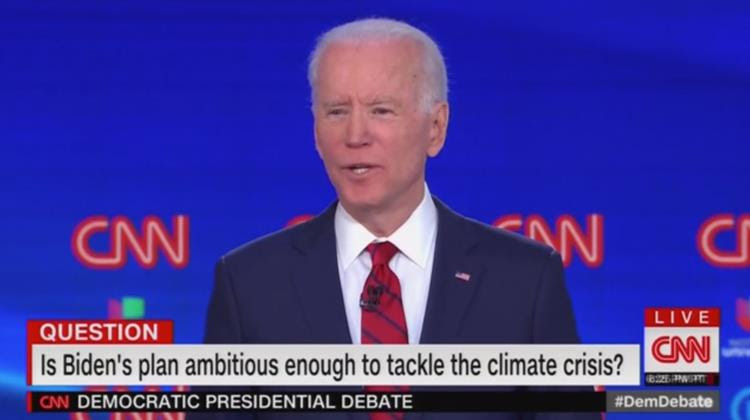 A Ban On Issuing Future Leases On Federal Lands Would Threaten An Estimated 268,000 Jobs. ("What If…Energy Production Was Banned On Federal Lands And Waters?" U.S. Chamber Of Commerce, 8/26/16)

Biden Has Pledged To Eliminate Oil, Gas, And Coal By 2035

Biden's Latest Climate Plan Calls For 100 Percent "Clean Energy" By 2035, Claiming He Will Spend A Staggering $2 Trillion Over Four Years To Make This Happen. "Joe Biden on Tuesday will call for setting a 100% clean-electricity standard by 2035 and investing $2 trillion over four years on clean energy, three people familiar with his plan said Monday." (Jennifer Epstein, Ari Natter, and Jennifer A Dlouhy, "Biden To Call For $2 Trillion In Spending On Clean Energy," Bloomberg, 7/13/20)

A Move To Eliminate Carbon Emissions In Biden's Time Frame Would Cost An Estimated $4.5 Trillion

A Wood Mackenzie Study Found That 100 Percent De-Carbonization Would Cost An Estimated $4.5 Trillion. "We estimate the cost of full decarbonisation of the US power grid at US$4.5 trillion, given the current state of technology." (Dan Shreve, "Deep Decarbonisation: the Multi-Trillion-Dollar Question," Wood Mackenzie, 6/27/19)

An Analysis From The Non-Partisan American Action Forum Found That A Move To 100 Percent Renewable Energy Would Cost $5.7 Trillion. "A 'Green New Deal' that includes a proposal to move 100 percent of U.S. electricity production to renewable sources would require at least $5.7 trillion of investment in renewable energy and storage." (Philip Rossetti, "What It Costs To Go 100 Percent Renewable," American Action Forum, 1/25/19)

In September 2019, Biden Suggested That He Was Open To Banning Crude Oil And Natural Gas Exports. CNN'S ANDERSON COOPER: "So let me ask you about that, because you talk about exporting. The United States is projected to be a net energy exporter by next year, largely because of crude oil and natural gas. Should the U.S. ban fossil fuel exports, as some other candidates are calling for?" JOE BIDEN: "Well, I think -- I think we should, in fact, depending on what it is they're exporting for what they're replacing. Everything is incremental. Everything is incremental." (Joe Biden, Remarks At A CNN Climate Change Town Hall. New York City, NY, 9/4/19) 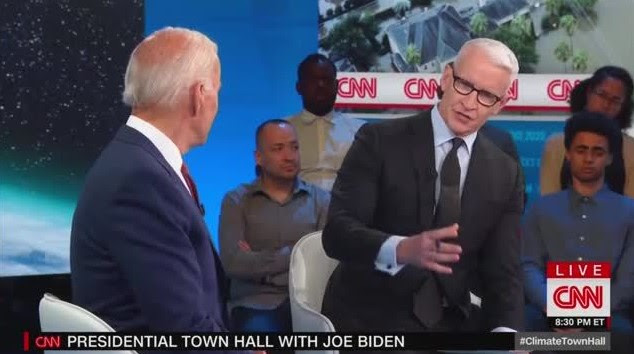 In November 2019, The U.S. Became A Net Energy Producer For The First Time Since Records Began 70 Years Ago. "The U.S. solidified its status as an energy producer by posting the first full month as a net exporter of crude and petroleum products since government records began in 1949. The nation exported 89,000 barrels a day more than it imported in September, according to data from the Energy Information Administration Friday. While the U.S. has previously reported net exports on a weekly basis, today's figures mark a key milestone that few would have predicted just a decade ago, before the onset of the shale boom. (Stephen Cunningham, "U.S. Posts First Month In 70 Years As A Net Petroleum Exporter," Bloomberg, 11/29/19)