As Americans go back to work in record numbers, voters should ask: why would anyone allow Joe Biden – who oversaw the slowest "recovery" since the Great Depression – to spoil it?

THE ECONOMY IS BOUNCING BACK SWIFTLY

1.4 Million Jobs Were Added Back In August

In Total, The Economy Has Added Back 10.6 Million Jobs Back Over The Last Four Months. (Bureau Of Labor Statistics, Accessed 9/4/20)

Unemployment Fell Across The Board

The Unemployment Rate Decreased From 10.2 Percent To 8.4 Percent In August. (Bureau Of Labor Statistics, Accessed 9/4/20)

The Great American Comeback, Better Than The Biden "Recovery"

In The Last Four Months, 48 Percent Of The Jobs Lost During The Pandemic Have Now Been Recovered. (Bureau Of Labor Statistics, Accessed 9/4/20)

The 1.4 Million Jobs Added Back In August Is 2.5 Times As Large As The Best Month Of Jobs Gains During The Biden "Recovery." (Bureau Of Labor Statistics, Accessed 9/4/20)

The Trump Administration's Actions Have Protected American Businesses And Workers

THE ECONOMY IS REBOUNDING TOWARDS PRE-PANDEMIC LEVELS

New Filings For U.S. Jobless Claims Was 881,000 For The Last Week In August Which Was "Better Than Estimates." "New filings for jobless claims totaled 881,000 last week, better than estimates as the employment market continued its gradual progress during the coronavirus pandemic recovery." (Jeff Cox, "Weekly Jobless Claims Total 881,000, Better Than Expected As Labor Market Continues To Heal," CNBC, 9/3/20)

New Unemployment Benefits Are At Its Lowest Level Since Mid-March, Before The Pandemic. "The number of new applications for unemployment benefits dipped to 881,000 last week, the Labor Department reported Thursday in an encouraging sign for the economy. Forecasters had projected 950,000 new jobless claims. Instead, claims fell to the lowest level since mid-March, before the pandemic induced mass layoffs." (Jay Heflin, "New Jobless Claims Fall To Lowest Level Since Mid-March," Washington Examiner, 9/3/20)

Jobless Claims Has Been Trending Downward Over The Past Several Months. "The total number of Americans receiving unemployment benefits fell sharply for the week ended July 25, down more than 3 million to 28.26 million, also pointing to a downward trend in joblessness. A year ago, that number was 1.7 million." (Jeff Cox, "U.S. Weekly Jobless Claims Fall To 963,000, First Time Below 1 Million Since Mid-March," CNBC, 8/13/20)

The Stock Market Has Rebounded

In August, The S&P 500 Closed At A Record High, "Capping A Remarkable Rebound" And Marking "The Index's Fastest-Ever Recovery From A Bear Market." "The S&P 500 closed at its highest level ever Tuesday, capping a remarkable rebound fueled by unprecedented government stimulus and optimism among investors about the world's ability to manage the coronavirus pandemic. ... The whole chapter, from peak-to-peak, spanned just 126 trading days and marks the index's fastest-ever recovery from a bear market." (Michael Wursthorn, "S&P 500 Sets First Record Since February, Erasing Its Coronavirus Plunge," The Wall Street Journal, 8/18/20)

Retail Sales Have Increased Three Months In A Row

Sharp Growth In The Housing Market

In April, The Congressional Budget Office (CBO) Projected That The Unemployment Rate For 2021 Would Be 10.1 Percent, And That It Would Only Decrease To 9.5 Percent By The End Of 2021. "The labor market is expected to improve after the third quarter, with a rebound in hiring and a significant reduction in furloughs as the degree of social distancing diminishes—leading to an increase in business activity and an increase in the demand for workers. In particular, the unemployment rate is projected to decline to 9.5 percent by the end of 2021. Under that projection, the unemployment rate at the end of 2021 would be about 6 percentage points higher than the rate in CBO's economic projection produced in January 2020, and the labor force would have about 6 million fewer people." (Phill Swagel, "CBO's Current Projections Of Output, Employment, And Interest Rates And A Preliminary Look At Federal Deficits For 2020 And 2021," Congressional Budget Office, 4/24/20) 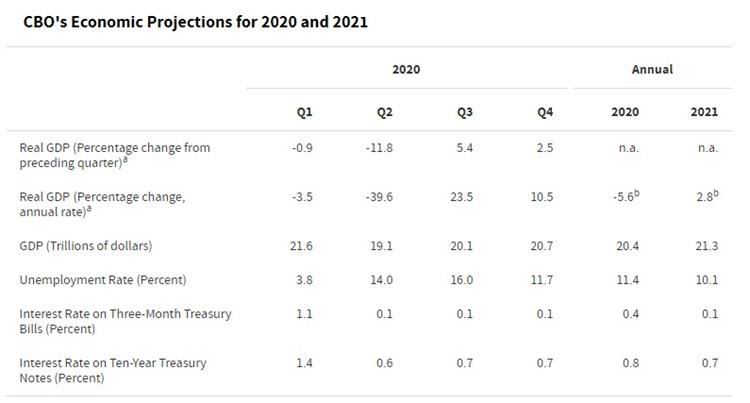 In July 2020, JPMorgan Estimated That Unemployment Would Not Fall Below 10.9 Percent By The End Of 2020. "Economists at the bank now peg their base-case scenario for unemployment at the end of 2020 at 10.9%, up from a prediction of 6.6% when it reported first-quarter earnings. That dimmed outlook comes as earlier-than-expected rehiring during May and June still left 20 million out of work, and as business reopenings are being rolled back in some regions." (Lisa Bellfuss, "What JPMorgan's Earnings Outlook Says About The U.S. Economy. Hint: It's Not Great," Barron's, 7/15/20)

In June 2020, The Federal Reserve Predicted Unemployment Would Only Fall To 9.3 Percent By The End Of 2020. "Federal Reserve leaders predict a slow recovery for the U.S. economy, with unemployment falling to 9.3 percent by the end of this year and to 6.5 percent by the end of 2021, after tens of millions of Americans lost their jobs in the stunning recession caused by the outbreak of the novel coronavirus." (Heather Long, "Federal Reserve Predicts Slow Recovery With Unemployment At 9.3 Percent By End Of 2020," The Washington Post, 6/10/20; "June 10, 2020: FOMC Projections Materials, Accessible Version," U.S. Federal Reserve, 6/10/20)

Economists, As Compiled By Bloomberg, Expected An Unemployment Rate Of 9.8 Percent In August. "The US economy added back a greater than expected number of payrolls in August and the unemployment rate improved by a larger than anticipated margin, as employers continued to bring back workers as virus-related business disruptions abated. Still, the pace of payroll gains slowed relative to recent months. Here were the main metrics from the Department of Labor's August jobs report released Friday morning, compared to consensus estimates compiled by Bloomberg: Change in non-farm payrolls: +1.371 million vs. +1.350 million expected, vs. +1.734 million in July; Unemployment rate: 8.4% vs. 9.8% expected, vs. 10.2% in July; Average hourly earnings, month over month: 0.4% vs. 0.0% expected, +0.1% in July; Average hourly earnings, year over year: 4.7% vs. 4.4% expected, 4.7% in July; Labor force participation rate: 61.7% vs. 61.8% expected, 61.4% in July." (Emily McCormick, "Jobs report: US economy adds 1.371 million payrolls in August, unemployment rate dips to 8.4%," Yahoo Finance, 9/4/20)