Campaign Press Release - If Joe Biden Gets His Way, You Won't Know The Election Results for Months

Universal vote-by-mail is a recipe for fraud and chaos.

It's been over a month since voting ended in New York's low-turnout, mass vote-by-mail primary and voters still don't know the outcome of two races. While President Trump pushes for safe, absentee voting for those unable to vote in person, Joe Biden and the Democrats are scheming to turn New York's horror story into a national nightmare in November – andthe liberal media continues to lie about it.

Examples across the country prove that universal, mass mail-in voting would lead to fraud and voter disenfranchisement. In Pennsylvania, tens of thousands of voters were unable to cast a ballot due to mail-in-ballot issues. In New Jersey's vote-by-mail election, 1 in 5 ballots were rejected as fraudulent and countless voters were disenfranchised. In California's primary, more than 100,000 mail-in ballots were rejected for a variety of reasons, including postmarking issues and signature mismatches. Some residents in Patterson, NJ, never received their mail-in ballots but were listed as having voted. In Georgia, a dead cat received a voter registration application.

As the Trump campaign's latest video illustrates, the risks of universal mail-in voting go on and on, but the national liberal media refuses to talk about it. 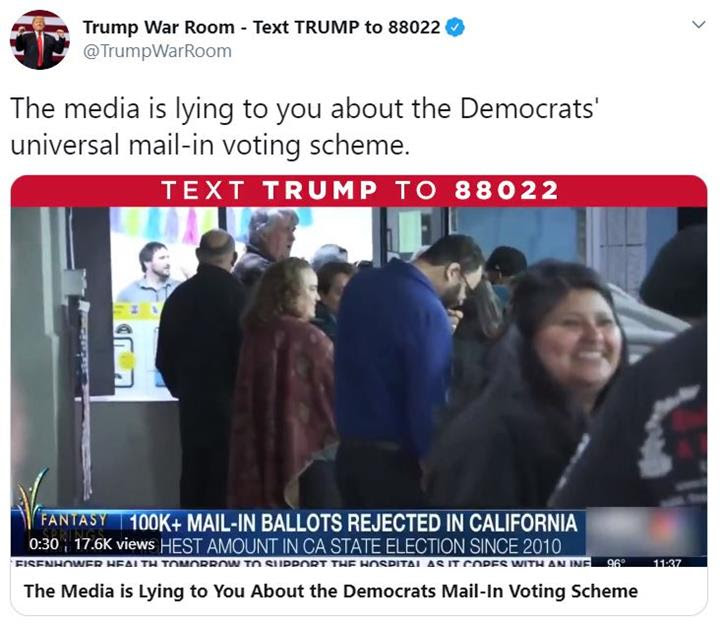