President Trump cut into Joe Biden's lead by 22,000 votes today and is on pace to win the state

THERE IS WIDESPREAD AGREEMENT – ARIZONA SHOULD NOT BE CALLED YET

Governor Doug Ducey (R-AZ): It Was "Far Too Early To Call The Election In Arizona" And All Votes Should Be Counted "Before Making Declarations." "Arizona Gov. Doug Ducey (R) said late Tuesday that it was still 'too early' to call the presidential race in the state, even as Democrat Joe Biden appeared to have a lead over President Trump in the traditionally red battleground. 'It's far too early to call the election in Arizona. Election Day votes are not fully reported, and we haven't even started to count early ballots dropped off at the polls,' Ducey tweeted around midnight. 'In AZ, we protected Election Day' he said. 'Let's count the votes — all the votes — before making declarations.'" (Justine Coleman, "Arizona Governor Says Too Early To Call Trump, Biden Race," The Hill, 10/4/20) 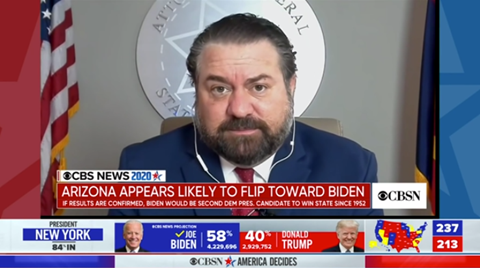 Rep. Debbie Lesko (R-AZ): "I'm Appalled … It Was Way Too Early." "MUST WATCH on @newsmax : I'm appalled Arizona was called for Joe Biden. It was way too early. AZ has a lot of early mail-in ballots, & hundreds of thousands of votes haven't been counted! Things are looking good for President @realdonaldtrump , & he has a good shot at winning AZ!" (Debbie Lesko, Twitter, 11/5/20)

Five Thirty Eight's Nate Silver: Calling Arizona Early Was A "Mistake." "For the time being, if you made the mistake (IMO) of calling AZ in the first place, you don't want being part of what gets Biden over the top to 270. So that leaves out calling based on NV. GA+NV is plausible but GA looks so close as to maybe be recount-bound." (Nate Silver, Twitter, 11/4/20)

The New York Times' Nate Cohn Said The Paper Has Not Called Arizona For Biden Because Data Shows "President Trump Could Fare Well" And Win. "The main reason we have not yet accepted the call in Arizona? We do not believe there's solid enough data on the votes that remain to be counted after Election Day. The data we do have suggests that President Trump could fare well. Mr. Biden was and is still favored in our view. But on Tuesday night and afterward, there was no way to preclude, based on hard evidence, the possibility that Mr. Trump could win. That's what a race call means to us." (Nate Cohn, "Why Has The Times Not Called Arizona?" The New York Times, 11/5/20) 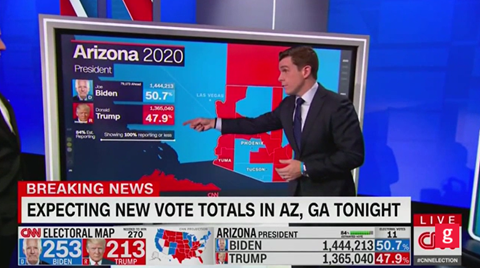 CNN Analyst Harry Enton: If President Trump Continues To Win The Remaining Ballots At His Current Pace, "He Would Be On The Track" In Arizona. CNN'S HARRY ENTON: "I believe he won that batch by about 18 percentage points. So that should -- that puts him there, in that batch. If that continued, which we obviously don't know if it would, but if it continued in that pace, he would be on the track." CNN'S CHRIS CUOMO: "So, if the President continues to perform the way he is right now, with each batch, he would meet and beat Biden's lead." CNN'S PHIL MATTINGLY: "At least meet. At least meet." (CNN, Live Event/Special, 11/5/20) 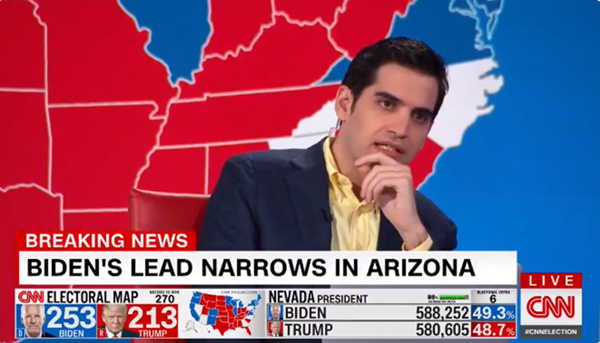 MSNBC's Steve Kornacki: The Remaining Votes In Arizona Can Deliver The State To Trump. MSNBC's STEVE KORNACKI: "What this is, we're going to call this the late early vote. And what I'm -- I can't really read my writing on there. The late early vote, these are the ballots, the mail-in ballots that arrived after the last week, like the Monday before the election that arrived like right before election day or that people drove into their polling places on election day. And I think you were talking about this, Rachel, with your guest earlier. There's a little bit of suspense. There's a little bit of philosophical debate among the election nerds. It's playing out right now because we know the early was going to be Democratic, and it was, we know the same day was going to be Republican, and it was. And then the question is, what is this going to be? What's this late early going to be? Look at how many ballots there are there. Now, one argument is, you know, it tends – it's early vote. We keep talking about the Democratic vote as being the early vote. Hey, won't this be Democratic vote? It could be. We'll find out in an hour. The argument against that is, the dynamic we've seen in this election is that the Democratic early vote was so excited, so enthusiastic, so eager to get out there that it was cast weeks ahead of time. It wasn't cast on the last day. It wasn`t driven into the polls in the last day. That's the behavior, go into the election place on – that's Republican voting behavior this year going and doing it on Election Day. So, those are the arguments you're hearing people make. The Trump campaign is making that last argument I just made. No, those are Republican votes that are about to come in. There's 420,000 Republican votes about to come in. Trump's going to win them by 26 points. Again, if he wins them by 26 points, he catches Joe Biden in Maricopa County, he catches him statewide. That's the question. What Trump has to do if he wants to catch Biden in Maricopa, if he wants to catch them in Arizona, he's got to win the late early bucket by the same score that he won the same day vote. He's got to be over 60 percent; he's got to win it by about 26. Anything less than that, probably not going to be enough to catch Biden. So that's the suspense we're building towards in Arizona." (MSNBC, Election Special, 11/4/20) 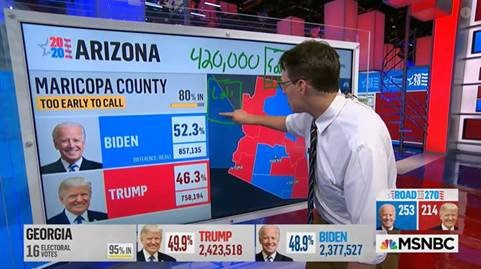 Politico Managing Editor Blake Hounshell: It Is "Totally Plausible" That President Trump Wins Arizona. "Am I wrong or is it totally plausible that Trump takes Arizona? If he wins the outstanding 515,000 ballots by the same rate as the batch that just posted, he could do it." (Blake Hounshell, Twitter, 11/4/20)

The Arizona Republic: The Latest Batch Of Votes Shows President Trump Could Still Win Arizona. "As Maricopa County released the results from 140,000 more ballots on Wednesday night and Thursday morning, President Donald Trump received almost the exact share he would need to charge back to win Arizona's 11 electoral votes and potentially reelection." (Rob O'Dell, Caitlin McGlade And Yvonne Wingett Sanchez, "In Latest Batch, Trump Gets Share Of Votes He Would Need To Reclaim Arizona. But Next Rounds Of Ballots Present New Challenges," Arizona Republic, 11/4/20)