Campaign Press Release - Debate Camp: Biden's Basement Has Been Put To Use For Weeks Of Debate Prep?

The Guardian: Biden Is A "Demonstrably Skilled Debater" With A "Sparkling" Wit. (Elana Schor, "Joe Biden: Profile," The Guardian, 8/23/08)

CNN: Biden Has "Reputation For Being A Sharp Debater." ("McCain Campaign: Clinton Did Not Say Obama Ready To Lead," CNN, 8/27/08)

Los Angeles Times: Biden "Spent More Than 30 Years" In The U.S. Senate, The "Greatest Deliberative Body" In Washington. "'But he also spent more than 30 years in the Senate, which is often referred to in Washington as the greatest deliberative body." (Lisa Mascaro, "Paul Ryan Vs. Joe Biden Debate Night Prep Underway," Los Angeles Times, 8/31/12)

In 2012, The Washington Post Reported That Biden Had "Not Been Taking Lightly His Preparations For Debate" Against Paul Ryan, Holding Practice Sessions And Studying Briefing Books For Months. "Vice President Biden, a man with nearly four decades of experience in politics, has not been taking lightly his preparations for his debate against Rep. Paul Ryan (R-Wis.), holding practice sessions and perusing briefing books in recent months." (Felicia Sonmez, "Expectations Run High For Biden-Ryan Debate," The Washington Post, 10/6/12)

In August 2020, Biden Told ABC News' David Muir That He Was Prepping For The Debates Already: "I Can Hardly Wait." ABC NEWS DAVID MUIR: "The President said he's already prepping for the debates." JOE BIDEN: "So am I. I can hardly wait." (Alisa Wiersema, "Biden Tells ABC's David Muir He 'Can Hardly Wait' For Fall Debates," ABC News, 8/23/20) 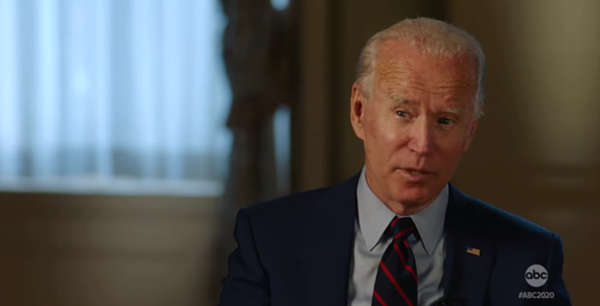 On September 2, 2020, Biden Said That He Had Already "Begun To Prepare" And Was "Looking Forward To Debating The President." JOE BIDEN: "I've begun to prepare by going over what the president has said, multiple lies he's told. What I'd love to have is a crawler at the bottom of the screen, a fact checker when we speak. If we really wanted to do something, I think that would make a great, great debate if everything both of us said was instantly fact checked by an agreed-to group of people out there. But that probably wouldn't get very far in the debate. I'm looking forward to debating the president, and I'm going to lay out as clearly as I can what I think we have to do to bring this country back and build it back better. I'm looking forward to the debate." (MSNBC's "MTP Daily," 9/2/20) 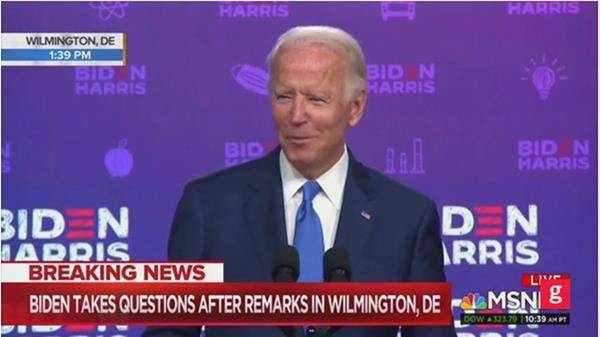 By Mid-September, Biden Had Been Preparing For The Debates For "Weeks." "Biden has been preparing for the first debate with Trump over the past few weeks in Wilmington. In a fundraiser last week, Biden offered a glimpse of his thinking going into the debate later this month. The former vice president said he had one main goal in taking on Trump: 'I hope I don't take the bait.'" (Amie Parnes, "Democrats On Edge As Biden Readies To Go After Trump At Debate," The Hill, 9/18/20)

Biden Did The Same Thing For The 2020 Democratic Primary Debates

In 2019, Biden Read Briefing Books Daily And Worked "With A Team Of Democratic Veterans" In Preparation For The Democratic Primary Debates. "Former Vice President Joe Biden is shifting his focus to his campaign's next crucial moment — the first Democratic debates, which will take place two weeks from now in Miami. Biden is reading briefing books daily in preparation for the televised showdown, and working with a team of Democratic veterans including longtime allies and Obama administration alumni. 'There's some prep happening most days, even when he is on the road,' said one source close to Biden. The diligence is necessary given that Biden, as the clear front-runner, will have a target on his back. Other candidates know that one way to create a stir and boost their profiles is to take him on." (Niall Stanage, "Inside Biden's Preparations For First Debate," The Hill, 6/13/19)

REGARDLESS OF HIS PERFORMANCE, THE MEDIA GIVES BIDEN POSITIVE REVIEWS

In March 2020, CNN Gave Joe Biden An "A" For His Debate Performance, Calling It "His Best Debate Ever." "Rising like a phoenix from the ashes of his previous debates, former Vice President Joe Biden met one of the most pivotal moments of his career with his best debate ever. Meanwhile, Vermont Sen. Bernie Sanders fell flat, failing to rise to the occasion. Amid the novel coronavirus crisis that has gripped the nation -- and the world -- the two Democratic presidential contenders were grilled on how they would handle the pandemic and while Biden was ready with strong, thoughtful responses, Sanders left much to be desired on the debate stage." (Todd Graham, "Debate Coach: Biden Had His Best Night To Date," CNN, 3/16/20)

In March 2020, Boston Globe's Scot Lehigh Said That Biden "Dominated" His Debate Against Senator Bernie Sanders. "Biden dominated not because he claimed the evening's easy headlines with his announcement that he would pick a woman as his running mate — why, who would have guessed? — and nominate a Black woman to the Supreme Court. Rather, he dominated because, in a time when the coronavirus crisis has a frightened country desperate for competent leadership, Biden demonstrated that he knows what must be done now in the struggle to contain the contagion and what will be required in the future to help hard-pressed Americans keep their lives and families more or less intact." (Scot Lehigh, "Biden's Convincing Debate Performance," Boston Globe, 3/16/20) 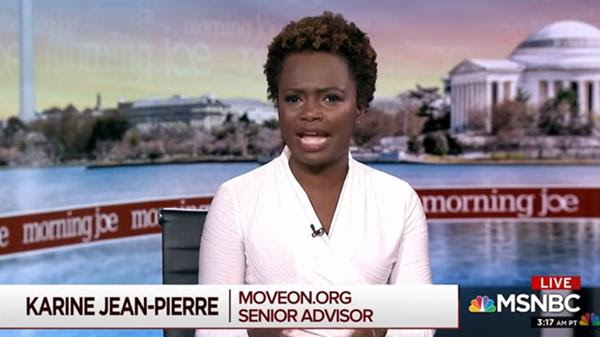 Jake Tapper Said That Despite Biden's Age, "Obviously Joe Biden Came Ready To Play" And That "Democrats Will Be Energized." ABC's JAKE TAPPER: "Well the Obama Campaign says that they feel that Vice President Biden did the forceful job he needs to do. A top Democrat that I had spoken with earlier was worried that the age difference would play poorly for the Vice President, being 69, that he feared that he would seem tired. Obviously, Vice President Biden came ready to play... Democrats will be energized by the Vice-President's performance this evening, they'll be excited, and it tees up President Obama well." (ABC News, 10/12/12) 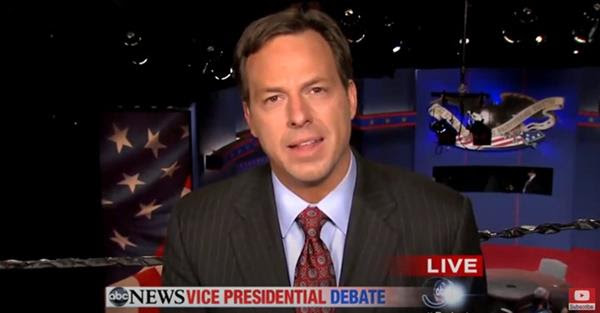 The Guardian: "Joe Biden's Alpha-Male Display Leaves Paul Ryan Overwhelmed In VP Debate." "In the normal course of events, vice-presidential debates, much like vice-presidents themselves, don't particularly matter. And this may well prove to be the case with Thursday night's confrontation in Kentucky. But if it is, it won't be for lack of trying on the part of Joe Biden, whose high-energy performance – part angry bar-room debater, part condescending elder uncle, part comic mime artist – frequently seemed to leave Paul Ryan overwhelmed. On more than one occasion, the Republican candidate visibly gulped. It's dispiriting, of course, that political discourse should have been reduced to such displays of alpha-male dominance, but there were times when the debate might have benefited from a whispering David Attenborough voiceover: 'And so the victorious older male, having bared his cosmetically enhanced teeth, stalks away, muttering: 'With all due respect, that's a bunch of malarkey ...'" (Oliver Burkeman, "Joe Biden's Alpha Male Display Leaves Paul Ryan Overwhelmed In VP Debate," The Guardian, 10/12/12) 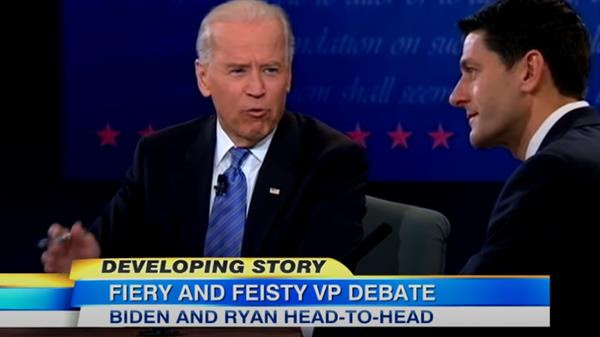 The Press Lauded Biden For His 2008 Debate Performance

Biden's Performance In The 2007 Democratic Debates Was One Of The Reasons Then-Candidate Barack Obama Choose Him As His Vice Presidential Nominee. "Against Sarah Palin in a 2008 vice presidential debate, Biden deftly navigated the challenges of an unconventional rival. When the stakes were high against Paul Ryan in 2012 after Obama flubbed his first head-to-head against Romney, Biden again came through. 'Is he capable of delivering? Yes. There was a lot on the line, we needed a circuit breaker and he did the job,' said Axelrod, who added that Biden's strong debate performances in the 2008 Democratic primary were one of the reasons Obama chose him for the ticket. '" (Natasha Korecki, "'He Realizes Now That He Screwed Up': Biden Scrambles To Recover From Debate Flop, Politico, 7/29/19)

The Guardian's Lola Adesioye: Biden's Debate Performance "Showed Why He's In A Different Class." "True, the governor of Alaska did better than many people expected. But Joe Biden showed why he's in a different class...There is no doubt that this debate was an all-out win for Joe Biden, who came across as a political heavyweight, affirming – to me, at least – that Sarah Palin, who is in no way, shape or form ready to be vice-president." (Lola Adesioye,, "No Debate, Biden Won," The Guardian, 10/3/08)

CBS News' Bob Schieffer: The 2008 Vice Presidential Debate Was A "Very Good Night" For Joe Biden. CBS NEWS' KATIE COURIC: "And, Bob, you know, most people were grading this debate on a curve. Did that make things tougher for Joe Biden, in your view? CBS NEWS' CHIEFFER: "I think actually it was a very good night for Joe Biden. I think he came off well, as you saw in that poll. People thought more of both of them after this debate. I would give this debate to Joe Biden on points, but I think Republicans are breathing a great sigh of relief. They'll take what they got last night." COURIC: "All right. Bob Schieffer and Jeff Greenfield, as always, great to talk to both of you. Thank you." (CBS News' "CBS Evening News," 10/3/08) 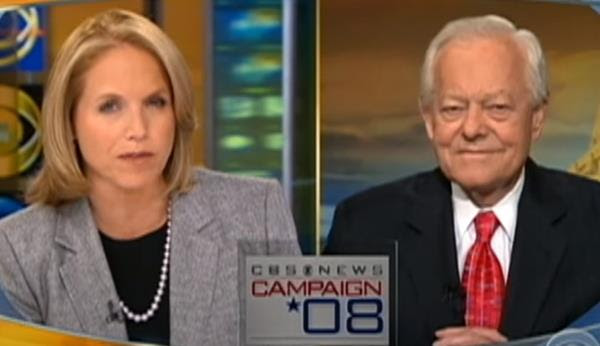