EVEN BEFORE HER NOMINATION, DEMOCRATS AND LIBERALS WERE TRYING TO DISQUALIFY JUDGE BARRETT OVER HER FAITH

Democrats Have Not Only Said Barrett's Faith Is Fair Game, But They Have Disparaged And Lied About Her Religious Beliefs

Senator Mazie Hirono (D-HI) Said Judge Barrett's Religious Views Should Not Be Off Limits, Baselessly Saying That Barrett Will Impose Her Ideological Agenda From The Bench."But asked if her religious views should be off-limits if Barrett comes before the committee again, Sen. Mazie Hirono said: 'No.' 'Look, it wasn't her religious views – it's anybody's views that they bring to their decision making... So they keep telling us that none of the things they wrote or said yesterday should infringe on their decision, but how can we be assured that they can be objective? ... Why should we say you get a lifetime appointment so that you can reflect your ideological agenda in your decision making?" (Manu Raju, "Democrats Weigh How To Handle Trump's Potential Supreme Court Pick After Past Flap Over Barrett's Faith," CNN, 9/23/20) 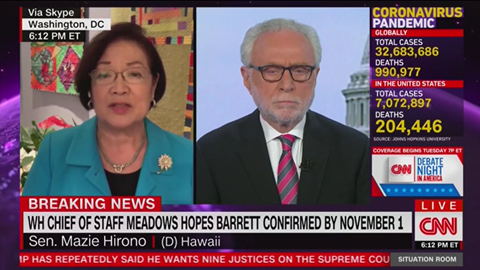 Former Congresswoman Katie Hill (D-CA) Smeared Judge Barrett By Saying Her Religion Comes "Straight Out Of The Handmaid's Tale." "Trump's top Supreme Court pick comes from a religion that is straight out of the Handmaid's Tale...because of course she fucking does. Fight for your uteruses, ladies, or pick the male you want to sign your rights over to." (Katie Hill, Twitter, 9/22/20) 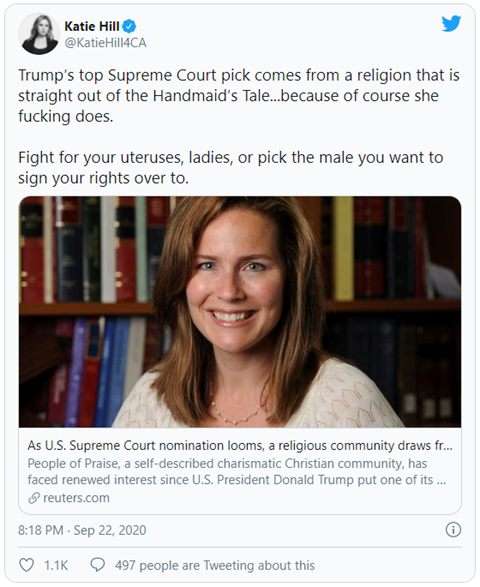 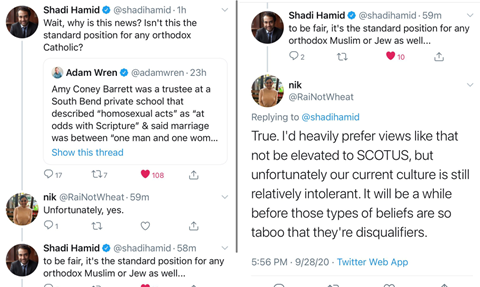 Virginia DNC Member Atima Omara Spread The False Claim That Barrett Belonged To A Religious Group That Inspired The Handmaid's Tale."Under the circumstances I'm pretty calm, know while the living version of Aunt Lydia in the Handmaid's Tale gets nominated to the Supreme Court to replace a woman who literally spent her life fighting for gender equity." (Atima Omara, Twitter, 9/25/20)

Former Democrat Presidential Candidate Marianne Williamson Said That Barrett Belonged To A Religious Group That Is A "Repressive" Sect And Said Her Religious Views Were "Genuinely Concerning." "Amy Barrett being Catholic is a good thing; Joe Biden is a Catholic too. Republicans are trying to make it as though the Left is criticizing her Catholicism but it's not true. It's the repressive tenets of the 'People of Praise' sect she belongs to that are genuinely concerning." (Marianne Williamson, Twitter, 9/27/20) 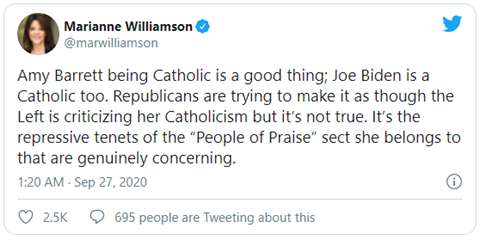 Former Democrat Candidate For U.S. Senate In Colorado, Diana Bray, Said She Can't Wait For Judge Barrett To Be Questioned On Her "Cult." "Praise Be, @amyklobuchar Time to fight like hell or Handmaid's Tale will be our reality. Can't wait to hear Amy Coney Barrett questioned on whether she ever had the role of 'Handmaid' in her People of Praise cult where women pledge subservience to men. You bet it's relevant." (Diana Bray, Twitter, 9/27/20) 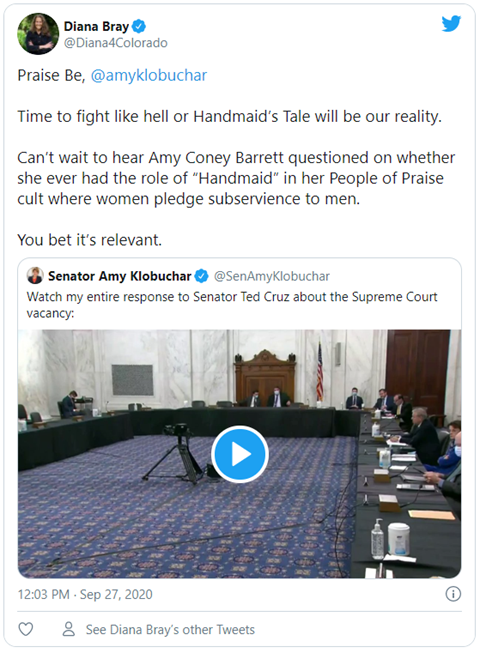 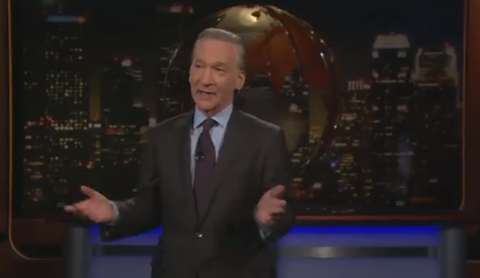 MSNBC's Nicolle Wallace Invoked Barrett's Faith Minutes After Her Nomination Was Announced And Suggested That Her "Association" With A Catholic Group Should Be Scrutinized. MSNBC's NICOLLE WALLACE: "Something else that MSNBC had up on the screen if you're watching this and not listening on Sirius in your car, I'll share it with you that when Judge Barrett was under scrutiny for her last appointment, information came out about her time and her relationship with the Christian organization called People of Praise. Now, this is some of what we know about that group and some of what was scrutinized last time she was evaluated. Members of the group, People of Praise, swear a lifelong Oath of Loyalty, called a Covenant to one another and are assigned and are held accountable to a personal adviser called the Head for Men, and a Handmaid for women. The group teaches that husbands are the heads of their wives and should take authority over the family. Because of the rush that Donald Trump feels Neal Katyal, because of the way this process is so condense. These sorts of things become part of our coverage, even on the day of a ceremony in the Rose Garden. What do you think the line of questioning will be about that association?" (MSNBC's "MSNBC Live," 9/26/20) 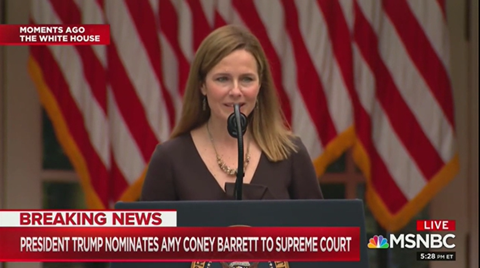 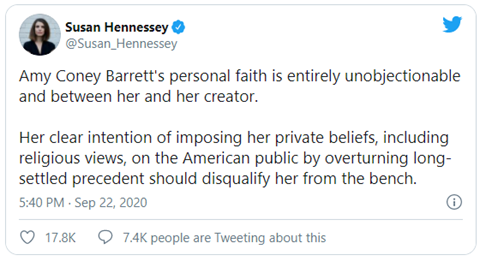 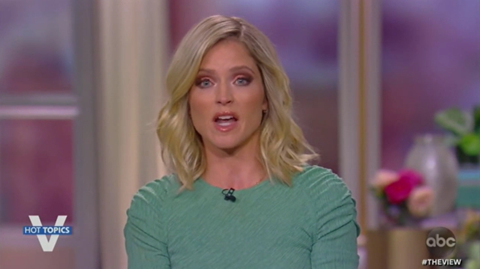 During Barrett's 2017 Confirmation Hearings, Sen. Dianne Feinstein (D-CA) Questioned Judge Barrett's Faith By Saying The "Dogma Lives Loudly Within [Her]." SEN. DIANNE FEINSTEIN: "When you read your speeches, the conclusion one draws is that the dogma lives loudly within you, and that's of concern when you come to big issues that large numbers of people have fought for years in this country." (Committee On The Judiciary, U.S. Senate, Hearing, 9/6/17) 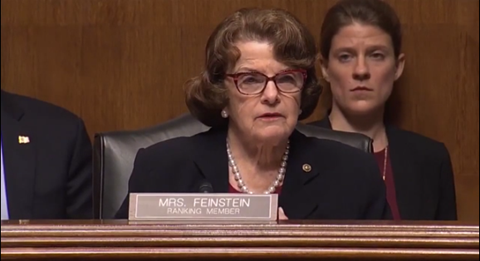 Sen. Dick Durbin (D-IL) Asked Judge Barrett If She Considers Herself An "Orthodox" Catholic. SEN. DICK DURBIN: "Do you consider yourself an orthodox Catholic?" (Committee On The Judiciary, U.S. Senate, Hearing, 9/6/17) 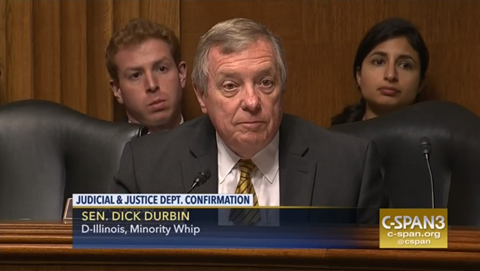 Sen. Mazie Hirono (D-HI) Questioned Whether As A "Catholic Judge," Would Barrett Would Recuse Herself From Death-Penalty Cases. SEN. MAZIE HIRONO: "In spite of the fact that you had written in an earlier article that Catholic judges—and you would be a Catholic judge—you would not recuse yourself from death-penalty cases?" (Committee On The Judiciary, U.S. Senate, Hearing, 9/6/17) 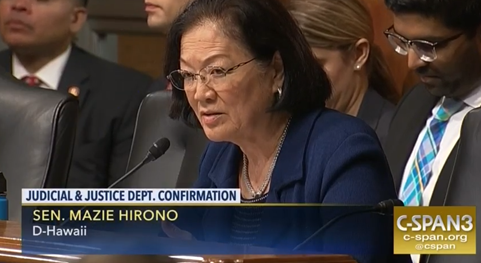 NARAL Smeared Judge Barrett By Claiming She Believes She Is "Bound By [Her] Religious Faith" When Making Decisions. "Her belief that judges should be bound by their religious faith, not the law, combined with her repeated statements rejecting stare decisis, the doctrine that requires courts to follow precedent, clearly threatens precedents such as Roe that form a basis for enforcing women's reproductive rights." (NARAL, Twitter, 9/16/17) 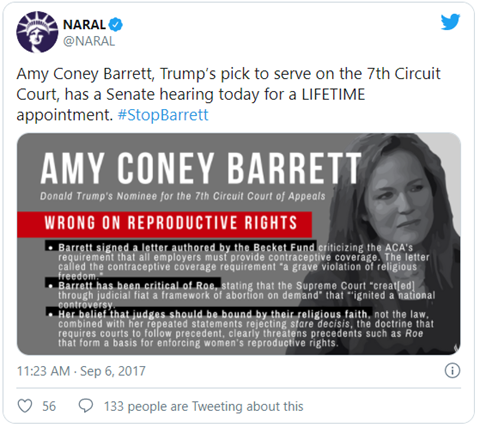 In 2018, Harris Suggested A Judicial Nominee Was Disqualified Because Of His Membership In The Knights Of Columbus, A Catholic Fraternal Organization

In 2018, Harris Insinuated That Nebraska District Judge Nominee Brian Buescher's Membership In The Charitable Catholic Organization The Knights of Columbus Disqualified Him From Serving Due To Its Pro-Life Stance. "In late 2018, while evaluating the nomination of Brian Buescher to serve as a district judge in Nebraska, Harris posed a series of questions insinuating that his involvement in the Knights of Columbus — a charitable Catholic fraternal organization — disqualified him from serving on the bench. Here's one of her written questions: Since 1993, you have been a member of the Knights of Columbus, an all-male society comprised primarily of Catholic men. In 2016, Carl Anderson, leader of the Knights of Columbus, described abortion as 'a legal regime that has resulted in more than 40 million deaths.' Mr. Anderson went on to say that 'abortion is the killing of the innocent on a massive scale.' Were you aware that the Knights of Columbus opposed a woman's right to choose when you joined the organization. She went on to ask Buescher whether he was 'aware that the Knights of Columbus opposed marriage equality when [he] joined the organization' and whether he had 'never, in any way, assisted with or contributed to advocacy against women's reproductive rights.'" (Alexander Desanctis, "Kamala Harris's Anti-Catholic Bigotry," National Review, 8/11/20)

The Washington Post'sMichael Gerson: "Harris Was Effectively Treating Membership In A Distinctly Catholic Organization As If It Were Allegiance To A Hate Group."(Michael Gerson, Column, "Kamala Harris Exacerbates Biden's Existing Problem With Religious Voters. He Must Work To Reassure Them.," The Washington Post, 8/13/20) 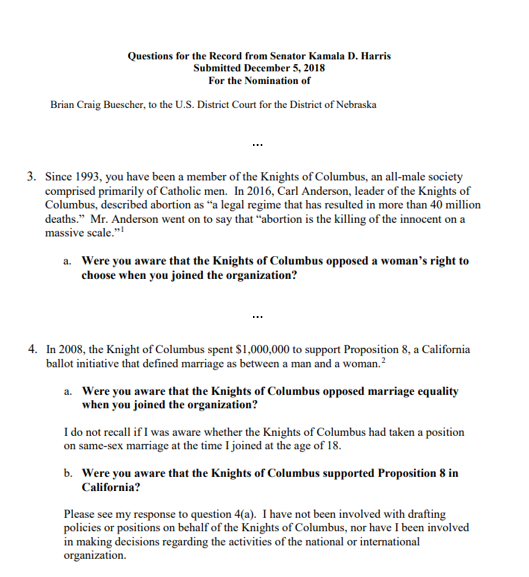 Harris' Questioning Was Condemned By Her Fellow Democrat Rep. Tulsi Gabbard (D-HI), Saying Such Questioning Was "Fomenting Religious Bigotry." "While I oppose the nomination of Brian Buescher to the U.S. District Court in Nebraska, I stand strongly against those who are fomenting religious bigotry, citing as disqualifiers Buescher's Catholicism and his affiliation with the Knights of Columbus. If Buescher is 'unqualified' because of his Catholicism and affiliation with the Knights of Columbus, then President John F. Kennedy, and the 'liberal lion of the Senate' Ted Kennedy would have been "unqualified" for the same reasons. Article 6 of the U.S. Constitution clearly states that there "shall be no religious test" for any seeking to serve in public office." (Rep. Tulsi Gabbard, Op-Ed, "Elected Leaders Who Weaponize Religion Are Playing A Dangerous Game," The Hill, 1/8/19)

The Senate Unanimously Passed A Resolution In Response To Harris' Questioning About The Knights Of Columbus, Reaffirming That The Constitution Forbids The Use Of Religious Tests For Public Officeholders. "On the Senate floor yesterday evening, Senator Ben Sasse (R., Neb.) led an effort to reaffirm the constitutional clause forbidding the use of religious tests for public officeholders. The resolution was agreed to by unanimous consent. The effort was prompted by recent questioning of a Catholic judicial nominee, Brian Buescher, over his membership in the Knights of Columbus. Democratic senators Mazie Hirono (Hawaii) and Kamala Harris (Calif.) asked Buescher whether his Catholic faith would prevent him from serving as an impartial judge, and Hirono went so far as to demand that he drop his membership in the Knights and recuse himself from any case on which the group has taken a position." (Alexandra Desanctis, "Senate Votes Unanimously To Rebuke Anti-Catholic Tests," National Review, 1/17/19)